Today I was utterly amazed at our weather. Being from Minnesota, we have learned to accept snow storms and heat waves at the most unexpected times. I don’t think I have seen anything so similar to a Laura Ingalls Wilder snowstorm in my lifetime.
Realization set in as I tried to get out the door to feed the chickens. You see, I couldn’t.

I had to shove and push, shut the door and try again.
Once I finally got out, I was thankful to see a shovel next to the door because there was a drift in front of me that reached at least to my hips. I shoveled my way to Peter’s snowshoes then got a lesson from him on how to put them on. It would have taken me thirty minutes to tromp out there and it’s behind the pine trees shown below.

Today also marks the day I realize that farming is not always enjoyable. As I got to the chickens, I could smell them. Having lived in Minnesota all our lives, we assumed we knew when the pasture would be ready for the chickens. We were hoping to turn them loose two weeks ago. These chickens want to be outside. Which leads to my next problem… As soon as I opened the door, they started hopping out of of the opening. I had nine runaway chickens within thirty seconds. Thankfully they could not get far with snow mounded at every escape. After I caught the runaways, I cooped myself up, literally, and fed the stinkers. However, I couldn’t figure out the new waterer, so I spilled water all over the barn floor. Thankfully the chickens stayed dry.

Chickens won’t be running outdoors today and neither will my boys. Peter informed me that he does not want to go out until summer. If June 21 looks anything like this, Mat says he will declare a new ice age. We will be reindeer farmers, he says.
As I write this, I’m smelling something to be thankful for. Mat is finishing off his third batch of pure maple syrup. I can hardly believe he was out in the sugar bush yesterday boiling sap down for ten hours. Boiling it to the perfect sugar content then canning it will heat it up a bit in the house. That should help since it might get down to 10º F tonight.

Enjoy the pictures of our snow day and get your orders in soon if you want maple syrup. 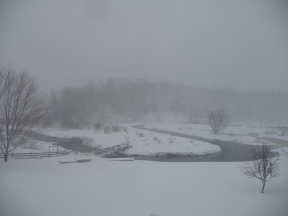 Necessary pieces of equipment … for April?

The walk to the chickens.

It’ll be a couple weeks before Silas will be able to get back on the trike. 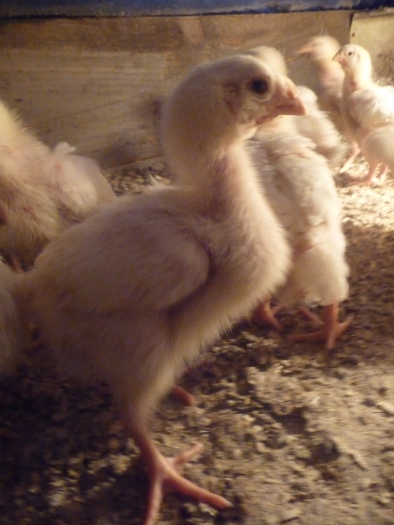 One chick from our second batch

An inquisitive chick wondering when it will be let out! 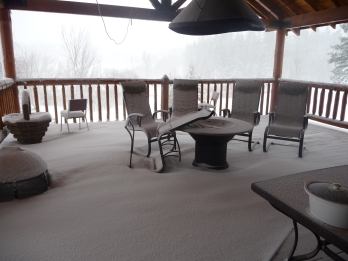 Not ready for hotdog roasts just yet.

5 thoughts on “Cooped up”